Home Europe Watford could put ‘important’ offer ‘on a plate’ for player – ‘Around...
SHARE

On Tuesday, we covered a rather interesting report in Italy about Watford once again being interested in Morten Thorsby.

The Norwegian midfielder was said to be a target for the Hornets in January, who had made a first request for information, which reportedly stemmed directly from their manager, Claudio Ranieri.

The Italian is said to be a big fan of Thorsby dating back from when the two of them worked together at Sampdoria, and with Watford trying to bolster their squad in an attempt to move away from the relegation zone, he has now become a target.

Corriere dello Sport have a bit more on the situation on Wednesday, explaining the Norway international is ‘very much liked’ by the Premier League side, who ‘could put on a plate an important offer to convince’ the Serie A side to sell their player. 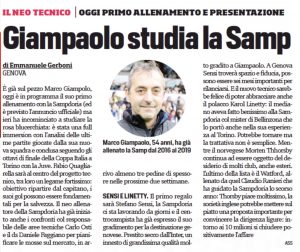 The newspaper then add that a fee of ‘around €10m will close the deal positively’, suggesting that this about is what is requested by Sampdoria in January for their player.

That should be affordable for the Hornets, although they have already invested in a few transfers this month, meaning they might have to double check how much they have left first.