The Dodi Lukebakio saga finally looks to be over.

For months the Watford owned player has been linked with a string of clubs, after a reasonably good season on loan at Fortuna Dusseldorf. The problem for a long time is that most of the clubs, including Lille, had a very unrealistic idea of the transfer fee Watford would accept.

Despite the money they’re bringing in this summer, Lille thought they could snatch Lukebakio away from the Hornets for a relative pittance, and in the end they’ve lost their man.

Bild have a picture of Lukebakio in a Hertha Berlin shirt and report that he’s now completed his medical to join the Bundesliga club. 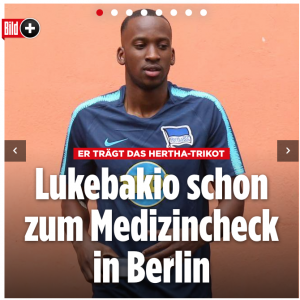 Hertha will be paying Watford €20m as a fixed fee and more in bonuses.

The German newspaper report the asking price had initially been €25m, and the two clubs have been in negotiations to reach a compromise.

Lukebakio will be Hertha’s record signing and an announcement is on the way.