Home Championship Watford player ‘one step away’ from joining another side – Suggestion it’s...
SHARE

The striker managed 19 goals and six assists in La Liga 2 last season, and has attracted interest from several clubs.

Over the weekend, AS reported that Granada are close to signing the 22-year-old.

It was also explained the Colombia international will join the La Liga side on a temporary deal, and they will have an option to make his transfer permanent.

Mundo Deportivo has a short update on the Hornets player, and the headline states Suárez is ‘about to be signed’ by Granada. Within the report, it’s explained the frontman is ‘one step away’ from joining the Spanish club. 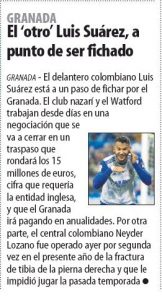 It’s claimed Granada and the Championship side have been working ‘for days’ to reach an agreement.

After days of negotiations, the two sides are going to close the deal at €15m, and Granada will pay the fee in instalments.

Mundo’s report suggests the South American will leave Watford on a permanent transfer, rather than on a loan deal as earlier reported by AS.