Quickly becoming one of the more regular stories in the Italian newspapers of late, Lazio’s interest in Watford’s Luis Suárez is picking up pace.

The striker has become a target for the Serie A side, who want to bolster their squad ahead of next season’s likely Champions League campaign, and they see the Colombian as the ideal man to sit behind and occasionally help out the likes of Ciro Immobile, Felipe Caicedo and Joaquín Correa in attack.

Currently on loan at Real Zaragoza, the forward has been in great form this season, which has attracted a lot of interest, yet it appears Lazio are edging ahead of the competition.

Both Gazzetta dello Sport and Corriere dello Sport have big articles on the matter on Friday, and the general consensus is an agreement has been found with the player regarding a contract, with the main obstacle now being dealing with Watford themselves.

We’ll start with the former of the two, who go all out with the headline ‘Lazio-Suárez, it’s yes. The OK with the player. Talks with Watford’.

Should the player sign, it would be a five year contract, with a starting wage of €1.5m/year, and the Serie A side now have to convince the Pozzo family.

The ‘idea’ would be to start off with an offer of around €15m, which they know could be seen as low by the Watford owners, but there’s hope the player’s willingness to move to Rome could help them in their endeavours. 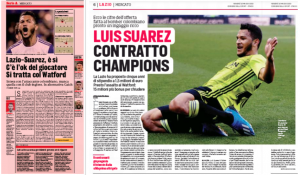 As for Corriere, they also have the figure of €1.5m/year regarding the five-year contract, and they report Lazio will come forward with a bid of €15m + bonuses.

However, Watford see Suárez as more of a €30m player, which means the Italian newspaper believe a deal could be done at around €20m.

That’s because they believe the Hornets ‘will be forced’ to sell him, since the striker ‘hasn’t accepted a renewal’, which has been offered to him ‘multiple times’.

Watford would ideally like to keep him, and they know him recently getting Spanish citizenship makes him even more appealing to clubs around Europe, which is why their stance is to try and get as much money as possible.

As things stand, it seems like Suárez could very well leave in the coming months, with the Premier League side making a big profit.

It’s just a matter of how big.