According to a claim in the Italian media, Watford are closing in on Bologna defender Adam Masina but are having to fight off a last minute ‘manoeuvre’ from Everton.

It’s also reported the player has turned down several renewal proposals from Bologna and with just 12 months left on his current deal, the Serie A side are pressured to sell the 24 year old.

Watford are said to have been interested in Masina since Marco Silva was manager at Vicarage Road, and it’s believed that’s where the Everton interest comes from.

However, it seems Watford are in pole position to land Masina and could get an agreement soon. 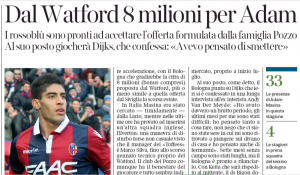 approval of the player, and ‘everything seems to be directed towards’ a transfer to Watford.

Confirmation of a move for the left back could be delayed because he’s changing agents from Marco De Marchi to Riccardo Calleri on July 1st.

There was an opinion piece from HITC around a week ago saying Everton ‘should’ move for Mesina, with the weight of ‘should’ sometimes mistranslated in Europe, but Corriere di Bologna don’t mention any English claims and present it as their own.

“It would be good” – Newcastle icon feels deal for player...