Gerard Deulofeu joined Watford on loan earlier in January from Barcelona, six months after he rejoined the Catalan club from Everton. The forward has since made it clear that he does not see a future for himself at Camp Nou.

Catalan newspaper Sport reported that Watford are set for tough negotiations as there is interest in Deulofeu. Barcelona are looking for the ‘maximum possible economic’ return from the sale of the 24-year-old.

The La Liga winners paid €12 million to Everton and are hoping to make a profit by allowing him leave this summer. Sport also suggested that Barcelona are confident they can make profit from Deulofeu’s sale.

Today’s edition of Mundo Deportivo claims Watford are keen on signing the player and will now meet his agents.

The Premier League club want to find out from Deulofeu’s entourage if there has been any proposals for the Spaniard from other clubs. Watford also want to press home their interest in signing the client and then convey their intentions of making an offer to the Catalan club for their player. 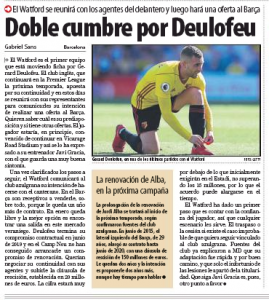 Deulofeu has one year left on his contract at Barcelona, He, in principle, is “convinced” to continue with the Hornets. Javi Gracia’s arrival at Vicarage Road in January has been a factor in his thinking.

Watford have made progress by taking the player into their confidence. Now, they have to agree a fee with Barcelona in signing Deulofeu on a permanent deal.