Saturday afternoon’s loss against Manchester United was Watford’s first of the season, as Javi Gracia’s side had, up until that point, won their first four games of the new campaign.

Thanks to their brilliant start, the Hornets have drawn comparison to Claudio Ranieri’s 2016 Leicester side, although the Spanish manager would rather avoid this, as he explained in an interview with L’Equipe over the weekend.

The former Malaga coach was interviewed about how he managed to turn things around at Vicarage Road on a relatively limited budget, spending just £25m this summer and losing one of the team’s stars, Richarlison, to Everton.

He said: “I arrived in January, at a time when there were a lot of injured players. We had to regain confidence after bad results. We tried to instil our way of doing things, but via normal things, nothing extraordinary. In preseason, we had more time to work, live together, strengthen the team mentality. 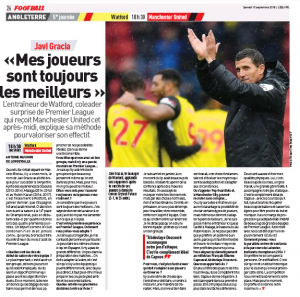 He continued: “There’s a series of things the manager has to do, an order to establish, a way of working, but if you want to do your job well, a fundamental thing is to evaluate the assets at your disposal and adapt to circumstances”.

For him, even the likes of Pep Guardiola, who appear to have unlimited funds at their disposal, will still need to readjust their way of thinking in some shape or form depending on the squad.

Explaining he isn’t the same manager at Watford that he was at Malaga, Osasuna or Rubin Kazan, the 48-year-old also doesn’t believe in a particular system, and just tries to make the most of the players he has in front of him.

Like a certain French midfield duo, whom he believes complete each other really well, and who have been key in helping Watford’s get off to an impressive start.

While the result against Manchester United wasn’t ideal, Watford will get a chance to redeem themselves next Saturday at Craven Cottage against newly-promoted Fulham.