Home Europe Watford have made €30m offer for player, and Newcastle plan to beat...
SHARE

Tuesday’s edition of L’Equipe has some big claims on Ismaïla Sarr, ones which may take come believing for Newcastle United fans long frustrated with their club’s approach to transfers.

It’s stated Watford have made a €30m offer for the Rennes player recently, but that was rejected by the Ligue 1 club. Newcastle are also interested but have yet to put anything in writing, however, it’s claimed Rafael Benitez’s side are close to offering a larger amount.

The French newspaper says they’ve been told this by their own English sources. Italian clubs are also interested, and it’s explained the Premier League is a big temptation for the player.

L’Equipe believe negotiations for a sale ‘should start from €40m’, and Sarr is taking his time deciding his future. 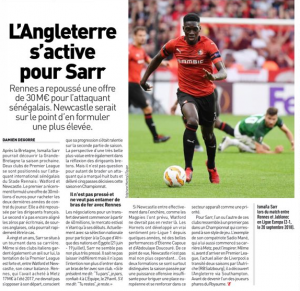 On June 10th, France Football reported an offer from Watford, although they didn’t give the amount. At that time it was claimed Rennes wanted €35m, so it’s gone up €5m in around a week.