After relegation from the Premier League this season, it seems likely to be a hectic summer at Watford.

A new manager will be incoming at some point, and a complete overhaul of the squad is widely expected.

Such a reboot is likely to see several players departing Vicarage Road, and striker Luis Suárez is likely to be towards the top of that list.

After an impressive season on loan with Real Zaragoza in the Spanish second division the Colombian has no shortage of suitors, and the latest to join the list are Villarreal.

That’s according to Super Deporte, who say the Watford striker is a player that the Spanish club ‘like a lot’ as they eye up signings for new manager Unai Emery this summer.

While they are well stocked for centre forwards, there is every chance one of them could leave, that has been the case in the past, and if that were to happen, the money would be reinvested.

Suárez is a player they have their eye on, with the club keeping track of him as a result of his ‘magnificent campaign’ with Zaragoza.

His season has shown that he is ‘already present in the world of football’ and that he is also ‘ready to make the leap to a team with more prestige.’ 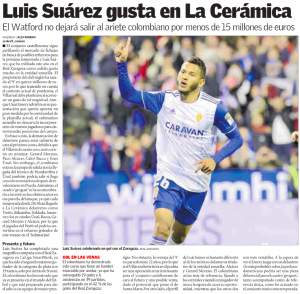 His age is also a significant plus. At 22-years-old, Villarreal believe he could be a ‘very interesting operation’ as there’s a chance to sell him in the future and make a profit.

Watford, for their part, have set an asking price of €15m – which is a price we’ve seen quoted elsewhere – but that figure is considered an ‘expenditure of magnitude’ by Villarreal, who will have to weigh up the pros and cons.

A return to Spain is clearly an option for Suárez, though, and he may not be the only Watford player to be heading there.

Super Deporte also report that Valencia are interested in defender Kiko Femenía as they hunt for a new right-back. 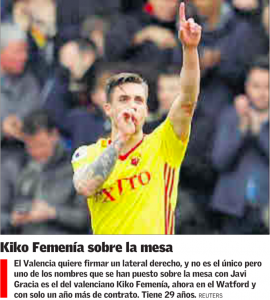 The newspaper states that they have several ideas on how to fill the position but one of the options presented by new boss Javi Gracia is Femenía, who worked with his compatriot at Vicarage Road.

They make no mention of an asking price, but Femenía is in the final year of his deal with Watford, which may make a deal easy to get done should the player want the move.