The left-back has featured regularly for the Spanish side and has managed a goal and three assists in 26 starts this season.

At the end of last month, we covered claims from La Razón that Atlético Madrid view the 22-year-old as a one of their left-back targets for next season.

It was also explained that Diego Simeone’s side could try to sign the Hornets owned player, if Osasuna decide against paying €10m to make his transfer permanent.

Monday’s edition of AS states the fullback is on the ‘agenda’ of Atlético. Apart from this, the newspaper provides no information on the Madrid based club’s plans for Estupiñán.

It’s claimed that Osasuna, for reasons unknown, will find it ‘very difficult’ to retain Estupiñán for next season. 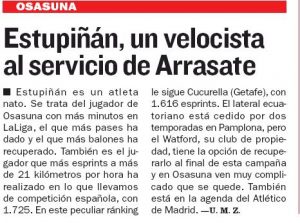 Watford have an option to recall the South American after the end of the season, but it isn’t clear whether or not they will exercise it.