Home Championship Watford invite highly rated youngster to train with them, has been to...
SHARE

As reported by Hallandsposten today, the Halmia player already been to Leeds United twice, as well as Sampdoria and Hellas Verona.

Those clubs want to keep an eye on the 17 year old goalkeeper, whilst they decide if he’s a player they may sign in the not too distant future.

The latest club to invite the youngster is Watford.

Törnqvist is quoted by the Swedish newspaper as saying: “It is very flattering that so many clubs show interest and think that you’re good. The dream of all football players is to become a professional.”

On the Watford opportunity he explained: “Their main scout Danny Dolan saw me in a training match against Eskilsminne in the pre-season and wanted me to come over. It was the day before my birthday so it was a good gift.”

He flew over last week and was picked up by Dolan at the airport, then taken to a host family. Having heard some bad stories about host families in the past, the stopper was pleased to be made completely welcome by Tricia, who he describes as “a fantastic lady in her 60s”. 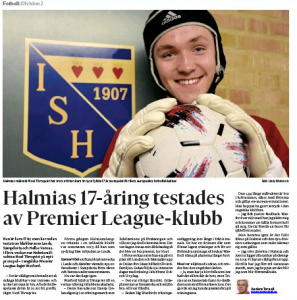 That he was so settled allowed Törnqvist to concentrate on training with Watford’s U18 and U23 sides: “I received positive feedback. Watford was happy with how I handled myself and will keep track of me. It is of course a boost for self-confidence.”

Just over a year ago, after one of his trips to Leeds United, the footballer said: “Sure, you hope to be offered a contract here in Leeds, but after this week everything is focused on Halmia.”