Home Europe Watford player has no regrets joining club, wants to make most of...
SHARE

Bought from RSC Charlero in January for £4.5m, Watford’s Dodi Lukebakio wasn’t really ready for the Premier League, so instead of rotting in the club’s reserves, the Belgium U21 international headed out on loan to Düsseldorf.

Doing so on July 22nd, the new Bundesliga winger has had some time to settle in at his new club before the new season, and decided to sit down with La Gazette to have a chat about how things were going.

Explaining he was welcomed incredibly warmly in Düsseldorf, the 20-year-old feels he’s landed in a club that suits him perfectly, where he feels he’l be able to develop well.

Despite having struggled to find some game time with the Hornets, Lukebakio doesn’t regret leaving Charleroi. 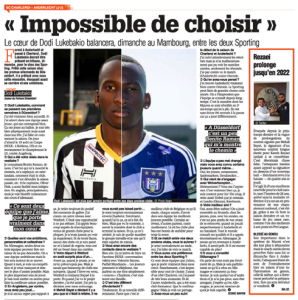 He said: “I always take positives from difficult times. I discovered a new level at Watford. It was an offer you couldn’t refuse. I learnt a lot from my teammates, who came from big clubs elsewhere. I’d never seen that before, and, anyways, none of the club’s I’ve been at have left me with regrets. They’ve all been boosts in my career”.

Revealing he chose Watford because of the project they had in mind going forward as a club, the young forward he just wants to play as much as possible this season with Düsseldorf, and help the club stay up in Bundesliga.

Perhaps he’ll impress so much, Javi Gracia will want him around next season? Who knows?