Valencia are in negotiations with Watford over a move for midfielder Etienne Capoue, who was recommended to the club by manager Javi Gracia.

The Hornets are looking to sell off several of their big-name players this summer following relegation to the Championship and Capoue is among those they are keen to move on.

Reports over the last week have linked him with a transfer to Valencia, who need to add to their squad this summer after selling off several first-team players to raise funds.

Indeed, yesterday Super Deporte reported that the Spanish were working on a double deal with the Hornets as they were also eyeing up striker Luis Suárez.

They double down on the Capoue link today and report he is one of the names on the table, with Valencia looking for two defenders, a midfielder and a striker this summer.

The Frenchman is the one they’ve chosen for midfield and is the ‘most immediate objective’ in terms of potential incomings at the club. 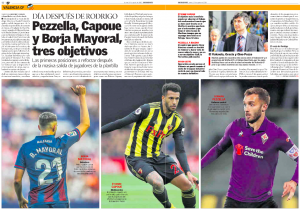 It’s explained he was recommended by Javi Gracia, who worked with him at Watford, and the club’s owners Meriton approve of the move.

However, they assume they won’t have to pay for the 32-year-old, so negotiations are underway with Gino Pozzo, Watford’s owner, about a loan deal.

The potential move is said to be ‘very advanced’, but the La Liga side still believe they can get a deal for Manchester City’s Yangel Herrera over the line so ‘prefer to wait’ before finalising anything for Capoue.