Dutch newspaper De Telegraaf report in their Monday edition that Feyenoord still want to bring Watford winger Steven Berghuis back to the club, but first the Premier League side need to sign a replacement.

Berghuis spent last season on loan with the Dutch champions after struggling to make an impact since arriving at Watford. The player has been part of Watford’s preseason training, and they are reluctant to let him leave before they bring in another attacker.

De Telegraaf have today reported Feyenoord manager Giovanni van Bronckhorst is again keen to work with Berghuis, but a deal could depend on whether Watford can sign Liverpool winger Lazar Markovic this summer, or someone similar. 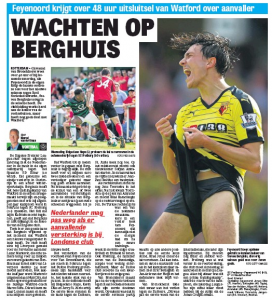 The Serbia international’s future at Liverpool looks uncertain, and the Dutch claims say Watford have offered the Merseyside club €12m for the player.

It’s unclear if that information has come via Feyenoord as part of their efforts for Berghuis or is based on media speculation.

De Telegraaf explain Watford’s situation is like not “throwing away old shoes until you have new ones”, so unless they can land somebody like Markovic, Berghuis is likely to remain in England.