Barring Watford fans, not many in England would be familiar with Pape Gueye.

Last April, the Hornets confirmed the signing of the midfielder on their official website and he was set to arrive at Vicarage Road on a free transfer in July 2020.

The 22-year-old, however, made his feelings known he wasn’t interested in moving to England and used a help of a lawyer to arrive at Marseille.

Watford weren’t pleased with this and their sporting director, Éric Roy, stated in July his side not go down without a fight after the Frenchman cancelled his contract with the club.

Wednesday’s edition of L’Equipe explain the Championship side have decided to ‘fight back’, more than seven months after the player ended up at Marseille.

It’s claimed the Hornets have ‘filed an appeal with FIFA to contest’ Gueye’s move to the Ligue 1 side, when he already had an agreement with the English club. 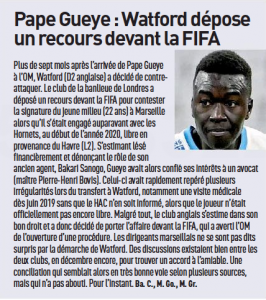 The player felt his former agent, Bakari Sanogo, badly advised him and hence, he ‘entrusted his interest’ to a lawyer, Pierre-Henri Bovis.

Bovis spotted irregularities in Gueye’s transfer to Watford and this includes a medical examination that took place in June 2019 without informing his then club, Le Havre AC.

Despite all of this, Watford feel they are in the right. Therefore, they have lodged a complaint with FIFA and have warned the French club of the ‘opening of proceedings’.

Marseille leaders are not surprised by Watford’s latest approach because the talks between the two clubs in December, to find an amicable solution, didn’t work out.