Unai Nunez was promoted to Athletic Club Bilbao’s first team in 2017 and started in 33 matches for them in the league that season.

However, the defender has been restricted to only six starts in the league during this campaign and the 21-year-old is drawing attention from other clubs, especially from England.

According to Spanish newspaper AS, Watford, Crystal Palace and Cardiff City are looking at the Spain U21 international, who is ‘not comfortable’ with limited playing time with the Basque club.

The Welsh club want to take him on a loan deal, while the Eagles and the Hornets offer €20m to land the centre-back on a permanent deal.

Nunez signed an extension with the La Liga outfit in October 2017 and his current deal runs down in 2023, which also has a release clause of €30m in his contract. 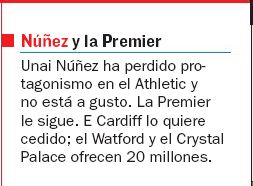 Even though Nunez is unhappy with lack of playing time, AS doesn’t mention if Athletic are ready to allow their player to leave.