A claim in Saturday’s edition of Mundo Deportivo took us by surprise, and the further we then looked to find more information, the more appeared.

According to the Spanish newspaper, Watford are keen on Jefferson Lerma.

It’s stated the Colombian international’s current club, Levante, yesterday extended his contract until 2022, with the release clause estimated at €50m.

But that doesn’t mean he’s absolutely staying, with it being explained the player’s continuity at the club isn’t assured, despite the new deal.

Some digging found two more claims, seemingly individual, on Watford and Lerma from this week. 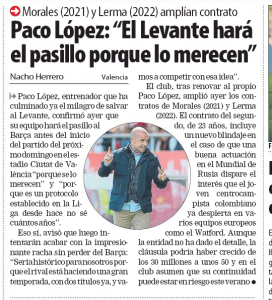 On May 9th, Grada3 in Spain reported Watford interest and said the club are willing to offer more than €15m.

Cadena Ser on the same day said Watford are planning a €20m offer and would quadruple the player’s salary.

A defensive midfielder, the 23 year old can play right back too. If he does well in Russia, further interest is expected.