Following a few years of heavy spending yet underachieving (Europa League final aside), Marseille have found themselves in an FFP pickle i.e. they have to sell before they can buy anyone this summer.

This means that some of their targets for the transfer window could end up going elsewhere, like Nimes Olympique’s Anthony Briancon.

According to La Provence, the 24-year-old is one of the players the Ligue 1 side are looking at, yet teams like Rennes, Eintracht Frankfurt and Watford are all circling as well.

Briancon had a very solid  season last year with Nimes, starting 87% of his club’s league games, scoring two goals and picking up two assists along the way. 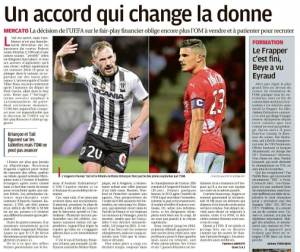 Currently on holiday, the centre-back is said to prefer a stay in the south of France, ‘seeing with a good eye’ Marseille’s interest in his services, but isn’t prepared to wait all summer for them, leaving an opening for clubs like Watford to swoop in.

As for the fee the Hornets would have to likely pay, it will have to be above €6m, since that’s a bid Nimes have already turned down this summer.

The defender is tied to the French club until 2021, and if Watford can get a bid of €10m or so on his team’s table, they might stand a chance at convincing both him and the Ligue 1 side.

After all, that’s €10m more than what his preferred destination, Marseille, can afford right now.