Jean-Clair Todibo left Toulouse and made a switch to Barcelona in January.

The defender went on to make two starts in the league for the La Liga winners as Ernesto Valverde preferred the likes of Gerard Pique and Clement Lenglet ahead of him in the centre-back position.

Monday’s edition of Catalan newspaper Sport claims Watford are interested in securing the services of 19-year-old in the summer transfer window.

A few days ago, the Hornets owner Gino Pozzo and sporting director Filipo Giraldi flew to Barcelona to hold talks with Blaugrana officials and the defender was the ‘objective of the meeting’.

It’s claimed the ‘interest’ from Vicarage Road is ‘firm’ and the Spanish champions have conveyed to Watford that they have not closed the door for a transfer, if the economic offer is important.

For now, Barca do not have immediate plans to sanction the Frenchman’s sale as they want to see his progression during preseason in July and early August. 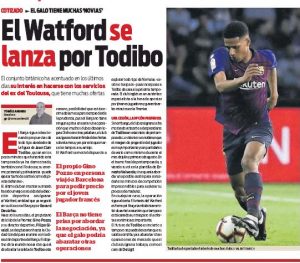 Valverde and the other technical leaders will then evaluate whether or not to retain the teenager, send him out on loan or sanction his sale.

Despite firm interest from Javi Gracia’s side in Todibo, no deal will take place soon.