Home Europe Watford have ‘asked the most’ about player – Can leave if right...
SHARE

The 2018-19 campaign saw the emergence of Kenny Lala as one of the better right-backs in Ligue 1, showing the world it’s never too late to burst onto the scene.

The Strasbourg defender was key in his side’s comfortable table finish this season (11th) and his performances caught the eye of many clubs around Europe, including Watford.

Using both Daryl Janmaat and Kiko Femenia in the position this season, Javi Gracia seems intent on adding a bit of quality to the role this summer, and Lala is supposedly on his list.

L’Equipe on Thursday look at the player’s situation, explaining that despite all the attention, no official offers have arrived for Strasbourg to seriously consider. 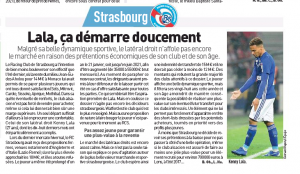 As things stand, Watford are the club to have ‘asked the most’ about the right-back, who will be allowed to leave if the right offer comes in.

The main issue, according to the French newspaper, (and this is for everyone, not just the Hornets) is Lala’s age.

At 27, few clubs are prepared to spend upwards of €12m on a player they would struggle to see any financial return on in a few years, which means Strasbourg, who ideally would like €15m for their star, might have to lower their demands, still leaving them with a nice profit considering they only paid around €700k for him back in 2017.

Perhaps if they decide to let him go for less than €10m, Watford might come knocking more seriously.