Back in November, we covered a story that warned Tottenham fans that Spurs could go for a lot of free transfers going forward.

That came from Fabrizio Biasin, who made it clear the club couldn’t afford to have a Paris Saint-Germain style transfer window to please Antonio Conte, with ‘maybe some zero-parameters’ to be looked at.

Well, if Gazzetta dello Sport are to be believed on Friday, that’s exactly the kind of player Spurs are targeting, with both Franck Kessie and Lorenzo Insigne named as potential signings.

The newspaper look at the future of a number of players whose contract are expiring either next June or in 2023, with the aforementioned two in the first category.

Looking at the Ivorian midfielder, who has been a reported target of Fabio Paratici’s since the summer, they make it clear to ‘watch out for Tottenham and Paris Saint-Germain’, who could offer more money than Milan as the Serie A side struggle to renew their star. 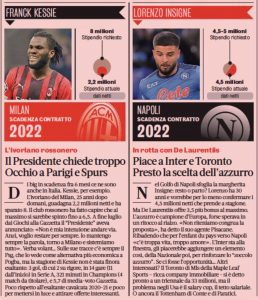 As for the Napoli forward, it’s pointed out that the Spurs ‘of Conte and Paratici’ are among the ‘others interested’ in the player, with Inter and Toronto in the MLS forming a lovely queue.

There’s not a whole lot of detail, but we all know that Daniel Levy will do something to try and please his manager in the long run, and if it means some bigger wages but little to no transfer fee, that could be a good compromise.