Home Premier League Aston Villa “It would be a waste” – Club president not interested in selling...
SHARE

About a month or so ago, L’Equipe had a report about the interest of many clubs in FC Dijon’s Mounir Chouiar.

Among those were Aston Villa, who had yet to come forward, and Peguy Luyindula, the club’s director of sport, made it clear the player would be staying put this summer regardless of whether or not the Villains came knocking.

That stance has now been reiterated by Dijon’s president, Olivier Delcourt, in an article looking at the Ligue 1 side’s plans for the summer.

Reminding their readers that Chouiar, who enjoyed a decent first season in France’s top flight, was attracting interest from clubs such as Nice, Celta Vigo, Sevilla, Fiorentina, Parma and Aston Villa, L’Equipe also managed to prise a few words out of Delcourt regarding their starlet.

He said: “Mounir is a young player. He should have a full season with us before leaving. If it’s to go to a very high level club and become a substitute, it would be a waste”. 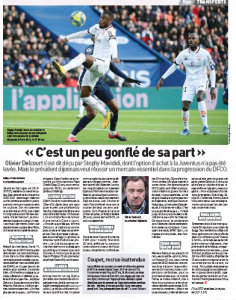 Delcourt also pointed out they had received ‘no offer’ for the 21-year-old, and the aim was to keep him for the time being.

Chouiar arrived from Lens late in last year’s transfer window for £3.2m, and scored six goals and picked up an assist in 24 appearances for the Ligue 1 side.