Olivier Giroud has played less than 200 minutes in all competitions for Chelsea this season, out of which 74 minutes came in the UEFA Super Cup defeat against Liverpool.

Since the end of August, the striker has been on the pitch for 17 minutes and that came in the Champions League tie against Valencia.

L’Equipe reports the likes of Lyon and Marseille, along with West Ham United looked at the option of signing the France international. It’s claimed the Hammers and the Ligue 1 clubs were ‘very interested’ in the 33-year-old.

Giroud opted for stability at Stamford Bridge but this was before Tammy Abraham exploded into the scene.

L’Equipe now suggest that was the wrong decision, and he should have move to West Ham or elsewhere.

Grioud has been called up again by Didier Deschamps, and the manger said: “His situation does not worry me yet, but it is not the best, neither for him nor for us.”

“I wish that his situation at his club can evolve. I need to find a player with rhythm. He’s going through a very rough phase in terms of playing time. There, it becomes disturbing on the athletic level.

“Last season, he played regularly in the cup competitions and Europa League. I had the opportunity to discuss it with him. But I do not know what will happen in a month.”

L’Equipe claims a ‘warning is issued’ to Giroud. Deschamps dropped Samuel Umtiti for Aymeric Laporte for September’s international fixtures, but the Barcelona defender was included after the Manchester City star suffered an injury. 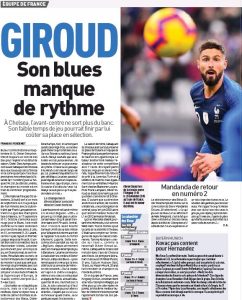 The French newspaper suggests a move to West Ham, Lyon or Marseille would have been a better option for Giroud to improve his chances of making it to the France squad for next summer’s European championship.