In their Sunday edition, Kicker reported that Thorgan Hazard has decided to leave Borussia Monchengladbach this summer, and his intention is likely to join Borussia Dortmund.

Kicker didn’t mentioned any Premier League interest, either in their magazine or online, and explained that Gladbach would look kindly on a move given the player only has a year of contract left. The value of a transfer is estimated at €40m.

Belgium’s DH cover the Kicker claims, but they have another angle.

DH say ‘Liverpool enters the dance’ and explain ‘it’s war’ between Hazard and Gladbach’s board, because the club would prefer a sale to the Reds.

The Belgian source says that Liverpool have made a higher offer than Gladbach. Whilst this is thought to be ‘flattering’ for Hazard, the move isn’t thought to be attractive from a sporting perspective.

That’s because the footballer is concerned he wouldn’t get enough playing time under Jurgen Klopp, with Liverpool already having top quality options in their attack. 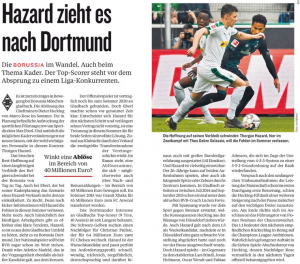 DH say there’s tensions at Gladbach. If Hazard doesn’t want to sign for Liverpool then he can hardly be forced to do so, especially given his contract situation.

Again, it’s worth noting Kicker didn’t even mention Liverpool in their report.