Mateusz Bogusz made only two appearances for Leeds United last season and those came in an EFL Cup tie against Stoke City in August 2019 and an appearance from the bench in the last Championship match of the previous campaign.

The Whites were promoted to the Premier League this term and the midfielder was aware featuring regularly for Marcelo Bielsa’s side was going to be difficult.

Therefore, the 19-year-old wanted to go out on loan and ended up joining second division Spanish side UD Logroñés.

Last week, the Poland U21 international admitted he had offers from other clubs in Spain, Italy and Poland, but felt joining the La Liga 2 side was the ‘right’ decision.

The Leeds owned player revealed he was approached by Legia Warsaw and Wisla Kraków from Poland, but didn’t discuss any details of other clubs from Spain and Italy.

Over the weekend, Przegląd Sportowy published an interview with Bogusz and he once again talked about the approach made by Legia.

“It is true that I had an offer from Legia, but I preferred not to return to Poland. It seems to me that the second division Spanish league is stronger than the Polish first division,” he said.

“The coach called me, said that everything was ready and if there was no offer for me, I could come to Legia.

“I would certainly win more there, but I preferred to go to Italy or Spain. There are really very good teams in the second Spanish league. We recently faced Espanyol and Mallorca, who were relegated from La Liga last season, who did not suffer many loses after the relegation.”

When further quizzed about the offers he had from Spain and Italy, Bogusz explained: “I had offers from SPAL and Castellón. However, negotiations were prolonged and there was no decision at Leeds on this matter.

“They told me to wait another week and so it continued until the end of the transfer window.” 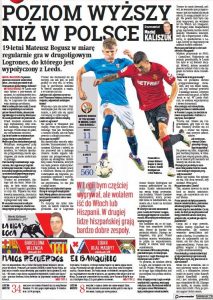 The Pole completed a temporary move to Logroñés on deadline day of the last window.

Although he was determined to go out on loan in the summer, Leeds’ decision to give green signal late in the window left Bogusz worried.

“Yes [I was nervous], from the beginning of the pre-season, I wanted this day to come, to avoid a repeat of last season. If I didn’t play again, it would be a step back. At Leeds, they promised to allow me go out on loan and they kept their word,” he stressed.