Home Championship “They wanted to send me to Watford” – Player then ‘quite quickly’...
SHARE

Neither of the two English clubs were able to sign the left-back and he ended up joining Antwerp on a loan deal last month.

Watford were given an opportunity to sign the 26-year-old by Simone Inzaghi’s side, and this has been revealed by the player himself during an interview with Gazet van Antwerpen.

In a lengthy interview with the Belgian newspaper, the brother of Inter Milan star Romelu Lukaku was asked when he decided to leave the Serie A side.

Responding to that, he said: “Euuuh … (thinks) Did I make that decision? Not really. They made that decision. Two days before deadline day. They wanted to send me to Watford. But then I said no and started calling around myself.”

The defender’s comments don’t specifically sconfirm whether or not the Championship side had any interest in taking him in the last window, but he’s made it clear he had no intention of moving to Vicarage Road.

Lazio’s decision to offer him to Watford convinced him to look for a new club and he received some help from the former Manchester United striker. 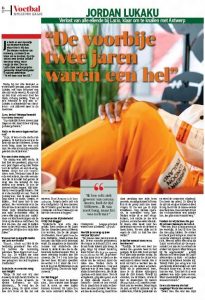 “I also had Antwerp in my head quite quickly. I knew; they play the right system, they play European, they are ambitious… I thought it was the perfect team,” Jordan explained.

“I talked about it with my brother and he also immediately said: ‘Do it!’

“Antwerp is the best solution. Romelu himself also called around – he knows people who know [Luciano] D’Onofrio [Antwerp sporting director] well. And I also brought in Peter Smeets to make contacts here.”