Of all the transfer stories to cause a shock this year, Jack Rodwell having a chance to join Roma is undoubtedly up there.

The midfielder was at Blackburn Rovers last season but failed to earn himself a stay beyond this summer and has been searching for a club ever since.

Such is Roma’s need for midfield additions they’ve turned to the former Everton and Manchester City man to help. It seems, though, he isn’t the only one on the table as former Leeds United man Vurnon Anita is also an option.

That’s according to Corriere dello Sport who say the midfielder has been offered to the club as a potential addition.

Anita has been without a club since leaving Leeds United last month, with Marcelo Bielsa’s side terminating his deal by mutual consent. 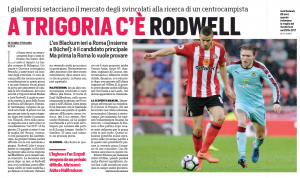 The midfielder spent two years at Elland Road but never settled, making just 22 appearances in all competitions for the club before his departure in September.

He’s been back in the Netherlands since then and was training with Ajax’s youth side to maintain his fitness.

He will now be eagerly waiting by the phone to see if Roma are as interested in him as he might be in them. However, that seems unlikely with Rodwell apparently at the front of the queue at present.