It seems that Tottenham Hotspur will have to hurry up if they’re really interested in signing Bruno Fernandes from Sporting.

The rumours around the Portuguese midfielder have been growing a lot in the past few weeks, and today, newspaper A Bola brings a story saying Atletico Madrid are edging closer to him.

According to the outlet, emissaries from the Spanish club watched the player in last weekend’s derby against Benfica, and after Diego Simeone’s approval, they’re preparing the first bid for the 23-year-old.

Atletico’s plan would be to secure the signing before the World Cup, as besides getting Fernandes at a lower price, they would also avoid the competition in case the player manages to have a great tournament. 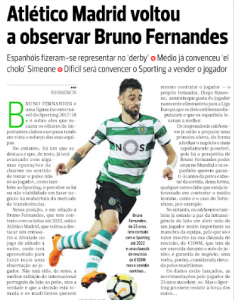 Even though several Premier League sides have been linked to Fernandes lately, it’s interesting how A Bola only mentions Tottenham in this story, making it sound like they’re the strongest competitors in England.

A Bola continues to point out that only the player’s €100m release clause would guarantee a deal for now, and unsurprisingly, Atletico Madrid think that’s too much money.

That should be the opinion of every single club who are interested in the midfielder, and apparently, we’ll have to wait and see how much will be necessary for Sporting to bend and accept to sell the player.