Alex Collado’s failed late move from Barcelona to Sheffield United has been covered repeatedly in the Catalan media since the end of the summer window.

Everything was agreed between Barca and the Championship club, only for things to fall apart as the final minutes ticked away. There’s been suggestions that Collado’s agent tried to change the terms with Sheffield United after a loan deal had already been agreed.

Interestingly, the Catalan media didn’t want to send all the blame to the English side, something they’d normally do. It’s been explained more than once that Barcelona were investigating the situation, and wanted to get Sheffield United’s version of events. 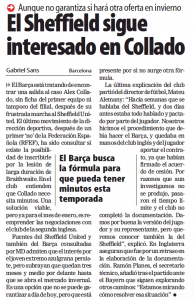 Whatever happened in that regard, it would appear the move could be revived for January. Mundo Deportivo report the club remain ‘interested’ in signing Collado, and a winter move would be a ‘viable solution’ for Barcelona and the player.

Therefore, negotiations could be started soon to make sure everything would be in place for when January comes.