There’s no denying that, with all their efforts to sign Nahitán Nandez from Cagliari, Leeds United are searching for a new midfielder.

Ideally, they would want one who runs around a lot and harries the opponent, and the Uruguayan would have fit the bill, but was a bit too much on the expensive side.

An alternative who wasn’t, however, is Gary Medel, who has way more years under his belt, but still offers a similar profile.

With a contract at Bologna until 2022 at the age of 34, the Chile international would undoubtedly be cheaper, and he had the option to go to the Premier League.

That’s according to Corriere dello Sport, who state the defensive midfielder ‘had offers’ in England’s top-tier, and was ‘long sought after’ by Leeds. 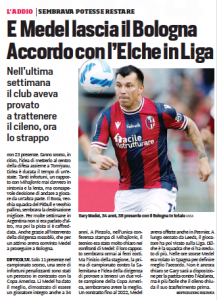 It seems, however, that he has decided to go to La Liga instead, with Elche ready to welcome him before the end of the transfer window.

That Leeds would want Medel would make sense, as Marcelo Bielsa knows the player well, having been his manager during his spell as head of the Chile national team between 2007 and 2011.

A reunion clearly wasn’t meant to be, though…