Matz Sels arrived at Newcastle United from Belgian outfit Gent in the summer of 2016. He was Rafael Benitez’s first choice goalkeeper in the Championship during the 2016/17 season. Having kept four clean sheets before mid September, he lost his place in the starting lineup after some shaky performances.

Since then, Sels has failed to convince the former Liverpool manager to keep him at St James’ Park. Newcastle were promoted to the Premier League last season and Benitez allowed the stopper to return to Belgium. He joined Anderlecht on a season-long loan deal.

Sels still has three years left on his contract with the Tyneside club, but Anderlecht want to sign him on a permanent transfer. According to the Belgium publication Het Laatste Nieuws, Anderlecht have a ‘verbal agreement’ with Sels on a five year contract.

Now it’s between the two clubs to agree a fee for Sels. It’s similar to claims last week of personal terms already being negotiated, but the problem stated then was Newcastle’s €4m asking price, which seems very reasonable. 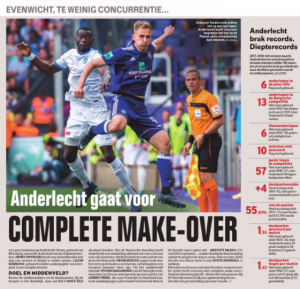 The player has been selected by Roberto Martinez for the Belgium World Cup squad. A failure from Anderlecht to seal the deal before he flies to Russia with the national team will force them to wait until he returns from the summer’s Fifa tournament.

€4m… It’s surely not a lot, even for Anderlecht.