Maybe if Tottenham Hotspur had tried a little harder for Bruno Fernandes they would have got him during the summer window.

Wednesday’s edition of O Jogo reports that Sporting’s ‘inability to sell’ the midfielder to the English market forced them to drop the price of Bas Dost, as they needed to be sure of bringing money in.

The Dutch striker ended up at Eintracht Frankfurt and their Sport Manager Fredi Bobic is quoted as saying: “We have been interested in Bas Dost for a long time. In the beginning, Sporting did not want to sell him for less than 15 or 20 million. We made a lot of money [in the transfer market] and the other clubs thought they should not set limits on their claims. What is certain is that after the English window closed, Dost’s value suddenly dropped to €7m.”

Sporting president Frederico Varandas revealed earlier this month that Tottenham were the only club to make a concrete offer for Bruno, but the structure of the deal, and specifically what the bonuses were based upon, wasn’t acceptable.

“The only serious proposal, which was still only verbal, was a €45m bid from Tottenham for Bruno Fernandes, plus €20m in goals,” Varandas told Sporting TV. 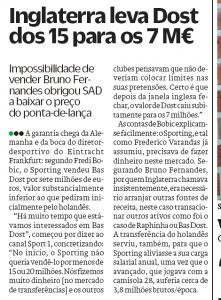 There’s a reasonable chance that if the bonuses on offer from Spurs had been more realistic, perhaps based on qualification for the Champions League and personal accomplishments for the player, then they would have got their man.

Bruno Fernandes has made five league appearances so far this season, scoring three goals and making four assists. Last season he made 53 appearances across all competitions, scored 32 goals and made 18 assists.