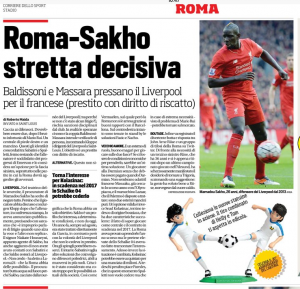 During the January transfer window, the Italian press were incredibly convinced that Roma were very interested in Liverpool’s Mamadou Sakho.

The French defender seemed an integral part to Jürgen Klopp’s team at the time, so we laughed it off and brushed it to the side, but things have changed since.

Obviously, the player being sent back to Liverpool from the club’s preseason tour raised a few eyebrows, despite the German manager’s insistence it was ‘nothing serious’.

Playing down a rift between player and manager is always vital to stop exit stories, but Corriere dello Sport go big on Monday, claiming Roma are trying to put pressure on Liverpool to let Sakho go.

The Italian club are looking for a cheap, versatile defender to bolster their backline, and the France international’s current situation at Liverpool has given them hope this could happen.

This comes despite Sakho’s agent, who spoke to local sports radio Laroma24, relayed by Corriere, suggesting Roma didn’t have the means to afford his client right now.

The Serie A club don’t believe this, and want to hear it from Liverpool’s mouth instead, meaning the duo of Mauro Baldissoni, Roma’s advisor to the board, and Frederic Massara, and aid to Walter Sabatini, are set to travel to America to hold talks with the Premier League club.

A meeting with Jürgen Klopp and Liverpool’s board is set to take place in Saint-Louis, with Roma hoping for a loan with a view to buy, and depending on the German’s plans, they could easily come back empty handed.