There’s raft of similar reports coming from US newspapers on Tuesday stating Marcelo Bielsa is a candidate to take over from Tata Martino at Atlanta United.

The club won the MLS Cup on Sunday and fans have welcomed the team through the city streets on a bus parade, but there’s set to be changes.

Miguel Almiron is expected to leave, with the Paraguayan potentially joining Newcastle United, and Martino is expected to take up the Mexican national team job.

That leaves a managerial gap, and The Morning Journal and others in the US, seemingly via a press association syndication, state Leeds United’s Bielsa and Boca Juniors manager Guillermo Barros Schelotto are named candidates.

Given all the prestigious national team jobs Bielsa has been linked to since taking over at Elland Road, including the Mexican job himself, there doesn’t seem like a great reason for him to be tempted by Atlanta. 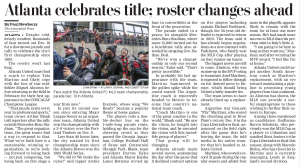 The MLS club are set to play in the CONCACAF Champions League, but Leeds fans would argue, and would have a point, there’s probably moire prestige involved in getting the Whites back to the Premier League.