Mundo Deportivo reported on June 11th that West Ham United are close to agreeing a fee with Barcelona for Marlon.

Today’s edition of the same newspaper drags the Marlon claims back a bit, but now states that when West Ham were discussing a deal for Marlon, Manuel Pellegrini’s side decided to go after Rafinha as well.

Rafinha was sent out on loan to Inter Milan in January and the Nerazzurri had an option to sign the midfielder on a permanent deal for €35m. However, the Serie A outfit have decided against signing the Barcelona player due to the financial constraints.

There were talks that Inter would still try to sign the South American. The report now claims the Italian club are unlikely to sign Rafinha and it has opened other avenues for the player. The 25-year-old is aware that he no longer has a future at the Camp Nou.

West Ham are said to be interested in Rafinha, but he wants to join a club that has higher ambitions, with Spurs and others linked. 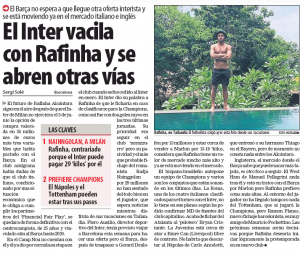 Mundo Deportivo say the next few weeks ‘will be decisive’ so the player can start preseason with his new club.

If nobody else comes in, and links to Arsenal and Tottenham aren’t very convincing yet, then West Ham would become a more attractive option.

Should the Hammers’ interest be as real as has been presented over the past few days, then they need to put some effort into wooing the player.