The media closest to Fiorentina are placing the blame at David Sullivan’s door for the collapse of Pedro Obiang’s transfer.

Corriere Fiorentino explain that it was thought everything was agreed, the midfielder would be returning to Serie A, and Fiorentina would pay around €10m and sign Obiang on a contract lasting four and a half years.

The newspaper states the collapse of the deal was ‘unexpected and sudden’, and they put the blame right at Sullivan’s door. it’s claimed the West Ham chief has taken Obiang off the market, feeling the player should remain at the club beyond the end of the current transfer window.

Unless there’s ‘dramatic changes’, and it’s not thought there will be, Obiang won’t be moving to Florence, and the Tuscany club need to find a new recruit for the January market. 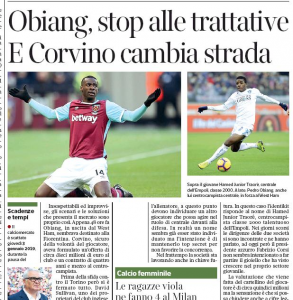 Interestingly, other reports in Italy say that West Ham pulled away from the deal after concerns grew over Fiorentina’s structure of payments, which sounds entirely reasonable from the Premier League club.

Forward reveals he tried to sign for Tottenham through ‘loophole’ –...