Liverpool’s trip to the Camp Nou ended in disappointment as they suffered a 3-0 defeat at the hands of Barcelona in the first leg of the Champions League semi-final.

Former Reds striker Luis Suarez, who last scored a goal in the European competition in April 2018 against AS Roma (Alisson Becker was then the Serie A outfit’s keeper), ended his CL drought by giving his side a lead in the first half.

Jurgen Klopp’s side started the second half on a brighter note and had two chances to equalise, but Marc-André ter Stegen made sure Barca’s lead was maintained after he denied James Milner and Mohamed Salah.

To bring more stability, Ernesto Valverde replaced Philippe Coutinho with Nelson Semedo and the Portuguese defender moved to the right-back position, allowing Sergio Roberto to then slot in midfield.

In the final quarter of the game, Lionel Messi scored a brace, which included an amazing free-kick, to make sure his side have a serious advantage entering the second leg.

The visitors had a chance to score a crucial away goal, but Roberto Firmino’s shot was cleared off the line and the rebound provided an opportunity for Salah to score, but he ended up hitting the post. 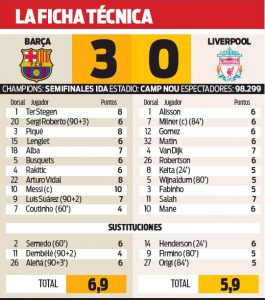 In stoppage time, Barcelona had two more opportunities to score, but they were not successful on both occasions.

In Mundo Deportivo’s player ratings, Ter Stegen and Messi are given four stars, while the rest of the starting XI were given three stars.

From Liverpool, only Fabinho, Robertson and Salah were given three stars, with rest rated two stars.

Mundo further summarised each player’s performance with one word and we have included few of them here. 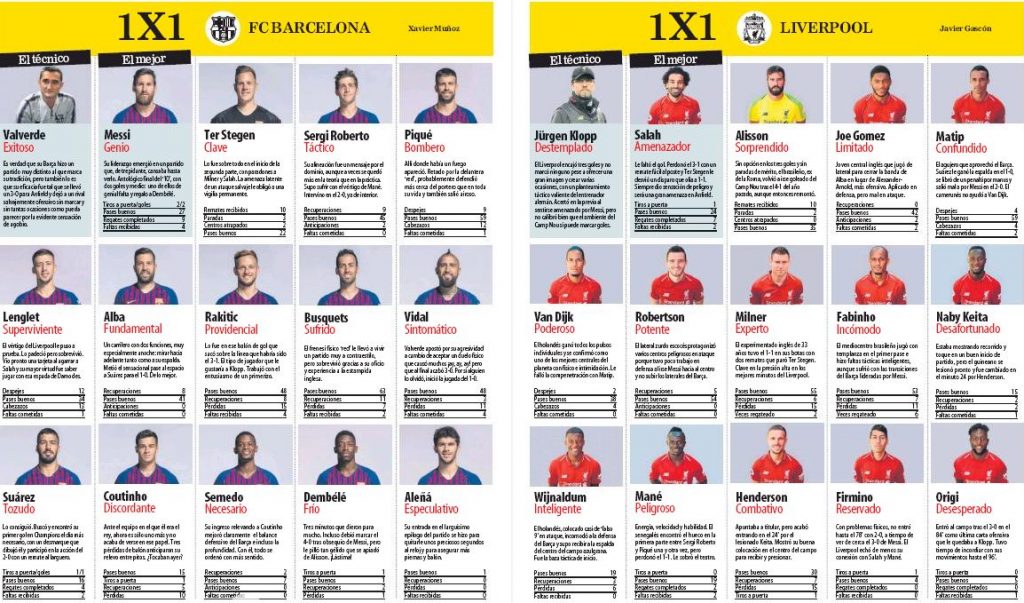 Fabinho was ‘uncomfortable’ according to Mundo because he ‘suffered with the transitions of Barca led by Messi’.

Naby Keita – Unlucky: ‘He was showing the route and playing a good start of the match, but the Guinean was injured early and was changed in the 24th minute for Henderson.’

The Spanish media have been positive towards Liverpool on the whole. 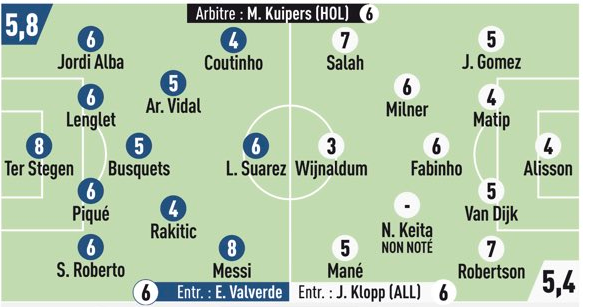 Without scoring a much needed away goal, Liverpool now have an uphill task to qualify for the Champions League final.

The second leg between Liverpool and Barcelona will be played at Anfield on May 7th.