On December 27th, we covered a report from Sport, who claimed that Arsenal are ‘willing to pay’ €16m to Real Madrid for Keylor Navas and the decision now rests with the goalkeeper.

Since the arrival of Thibaut Courtois at Santiago Bernabeu, the Costa Rican international has seen his playing time limited.

Following Santiago Solari’s appointment, the stopper has not featured in any competition for Los Blancos and it’s no secret that he is ‘unhappy’ with Real.

He posted a potential goodbye message on Instagram, which has led to speculation that he could leave the Champions League winners in January.

In today’s edition of Catalan newspaper Sport, the Gunners’ interest once again gets a mention as it’s claimed that Unai Emery wants the 32-year-old at Arsenal. 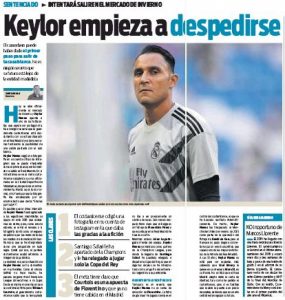 AS Roma sporting director Monchi is also trying to sign him for the Serie A outfit.

Navas’ contract at the Spanish capital club will expire in 2020 and he has already requested to leave the club.

Sport reports that it is not easy for Real Madrid to open the exit door for him, but it is feasible to sanction his transfer for a ‘reasonable price’, considering that he has 18 months left on his contract.

Arsenal of course signed Bernd Leno in the summer, but this Navas claim continues to pop up.