Argentina qualified for the knockout stages of the 2018 World Cup following their 2-1 victory over Nigeria in the final group stage fixture. It was a must win tie for the South American nation on Tuesday.

Barcelona star Lionel Messi opened the scoring and Manchester United defender Marcos Rojo scored the winner in the final quarter of the match. It was Messi’s first goal of the tournament and it was possible because of a precise pass from Ever Banega.

The Sevilla midfielder came on as a second half substitute against Iceland, while he did not feature in Argentina’s 3-0 defeat to Croatia. It was the 29-year-old’s first start of the 2018 World Cup and he impressed for La Albiceleste.

Banega has been linked with a move to Arsenal and is a reported transfer target for their new manager Unai Emery. Marca reported on June 25th that Sevilla are worried that their midfielder could join the north London club this summer. 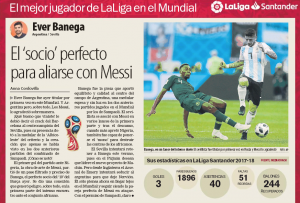 Today’s edition of Mundo Deportivo claims the La Liga outfit will try to retain Banega beyond the summer transfer window. Sevilla want the Argentine international to ‘spearhead the project’ under their new manager, Pablo Machin.

Banega he has €20m release clause in his contract. Mundo Deportivo claims Emery will try to ‘seduce’ the player and convince him to leave Sevilla this summer. The former Inter Milan man is not thinking about his future and wants to focus only on the World Cup.