Home Europe ‘Unacceptable’ – Celtic man handed 1/10 rating after being taken off at...
SHARE

Described by André Villas-Boas as the reason why he resigned from his job at Marseille, the loan taking Olivier Ntcham to the south of France started off on the wrong foot.

The player publicly stated he wasn’t affected by the Portuguese manager’s choice and was happy to be there, but it’s clear there is a lot of work for him to do to win everyone over.

His first few appearances really haven’t helped, and this weekend’s abysmal 2-1 loss against Canet RFC, a fourth-tier side, in the French cup will have done far more harm than good.

A starter, with the hope some minutes against a far weaker side would help him get his fitness back, Ntcham lasted 45 minutes.

Just liked their last game against Lille, the Celtic loanee was hooked off at half-time by interim manager Nasser Larguet, and his performance was highly criticised by local newspaper La Provence.

Three separate journalists (two at the stadium and one in front of his TV) gave him a rating of 1/10, which is described as ‘unacceptable’.

That is, by a whole 0.7, the worst rating given to a Marseille player for the game, with goalscorer Arkadiusz Milik earning the best grade at 4.7/10. 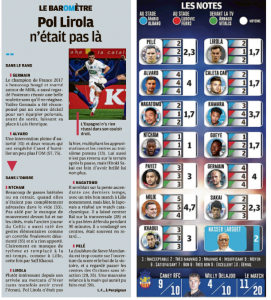 Looking at his performance in more detail, one of the journalists, Ludovic Ferro, wrote: ‘A lot of sideways and backwards passes, when they weren’t completely sent into the void. Not helped by the lack of movement in front of him or on the sides, the former Celtic player also missed basic moves and didn’t bring anything to the table. Clearly lacking rhythm’.

There will now be hope that Jorge Sampaoli, who will take over after this game, can turn things around for the midfielder, whom Marseille can turn into a permanent player of theirs for €6m or so.

Whether or not they do will depend on the coming months, but those keeping an eye on things from Parkhead will, at this point, be praying he can, because this move hasn’t really put Ntcham in the best of light so far.