It feels like every Watford transfer story we cover these days involves Udinese in some shape or form.

We shouldn’t really be surprised when you look at how closely linked the two clubs are when it comes to their owners, but this transfer window has seemed to involve more inter-Pozzo swaps than usual.

After the transfers of both Ignazio Pussetto and Marvin Zeegelaar followed by reports of Filip Stuparevic potentially heading to Italy on loan, it’s 32-year-old Sebastian Prödl’s turn to be mentioned.

The news comes from local newspaper Messaggero Veneto, who explain the Austrian would be an option for Udinese if Sebastien de Maio were to leave before the end of the January transfer window. 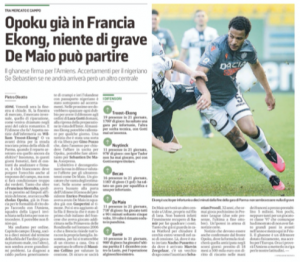 The deal would have to be done by Friday, but it would only happen if the Frenchman exited for pastures anew.

It seems Udinese are simply covering their backs and don’t want to be caught short, and where better to get a quick deal done than at your son’s club?