The long saga surrounding Leroy Sané’s future came to an end on July 3rd after Bayern Munich agreed a deal with Manchester City for his transfer.

The winger’s decision to leave the Etihad has left the Cityzens short of options on the wide positions.

It’s likely the Premier League side will bring in a replacement for the former Schalke man in the next window, and City wanted Kingsley Coman to be his successor, according to SportBild.

The English side wanted the Bavarian club to include their player as a part of the deal for Sané.

It’s claimed City sporting director Txiki Begiristain ‘pushed until the end’ for a swap deal involving the France international and the German.

Coman initially joined Bayern Munich on loan from Juventus in 2015 when Pep Guardiola was in charge at Allianz Arena. His transfer was made permanent in 2017. 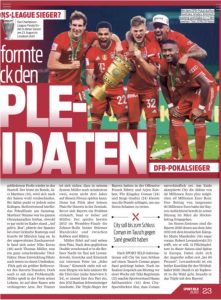 According to the report, the final stretch of negotiations for Sané’s signing took place last Monday and during the talks between Begiristain and Bayern sporting director Hasan Salihamidžić, the latter made it clear ‘Coman was not for sale’.