Mino Raiola has mastered the art of getting the best deal for his clients and himself, and usually doesn’t care who he upsets along the way.

He’s not the only one, and it would appear City would rather stay away from the agent’s clients as much as they possibly can.

Earlier in the window, Raiola convinced Matthijs de Ligt to join Juventus after attracting interest from top clubs across Europe.

Rico claims the 19-year-old wanted to make a switch to Camp Nou, but his representative was clear from the beginning,… a move to Barca was ‘too soon’. 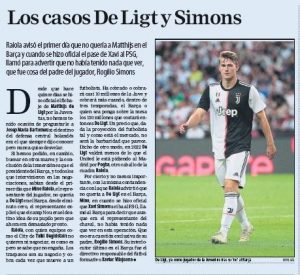 Interestingly, it’s reported the agent made clear to Barcelona that this move wasn’t down to him, but rather the player’s family.

Raiola clarified to Barca president that the youngster’s father Rogilio Simons was the one pushing for the PSG move.

Perhaps he doesn’t want Barca to end up feeling the same way as Manchester City.

“Arsenal is not the absolute top” – Player warned against Gunners move, feeling he could end up stuck

“Arsenal is not the absolute top” – Player warned against Gunners...