The conflict between Claudio Bravo and Arturo Vidal at the national team continues to be the most commented topic in the Chilean media, who have been following every step of their reunion.

Newspaper El Mercurio has a story about this on their sports’ front page today, but it turns out they have something more interesting about the Manchester City goalkeeper, apart from this controversy.

The outlet managed to speak to Txiki Begiristain, who had something to say about Claudio Bravo’s recovery from injury and his future at the club.

El Mercurio points out that Begiristain made it pretty clear he’s not a man who gives interviews, but they’ve actually taken some nice bits from him in this short conversation.

“We need a little time to confirm what we are seeing,” the director told El Mercurio. “We must remember that he’s been injured for a year and this is not seen in one or two months. After that time, we will make a joint decision, which depends on the two parties, because this is our decision and then his, but I want to make it clear that there is nothing settled. To this day, we are delighted with him.” 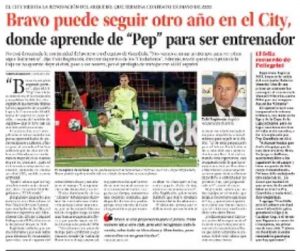 Begiristain has also revealed that Bravo could become a manager in the future. The director says the goalkeeper is getting prepared for a new job.

“He’s preparing for the future. He could have gone to another club to play every game. Here he is taking all experience, collecting everything he has lived, especially in Barcelona and Manchester, to become a great manager, sporting director or goalkeeper coach. You have to ask him.”