Home Europe “The two of us crying” – Rocha on difficulties settling at Tottenham,...
SHARE

The 42-year-old had an interesting chat about his whole career, but the part highlighted by the outlet is the one where he talks about Benfica star Adel Taarabt.

Rocha recalls that the Moroccan player was just a boy during his time in London, but it was easy to spot his quality back then.

“At 18 he already had a brutal technical quality. In training he’d break it all… I also played with Bale, who was signed at a young age from Southampton. We had an excellent team,” Ricardo Rocha told Record.

“We lived close to each other and used to give him a ride for training. We created a good relationship, and whenever we are together at any Benfica event, we talk about those times. There have always been coaches and players confirming his quality, but that player was very clinging to the ball. He continues to make all those things, but I value him because he knew how to find himself. He has a strong character.” 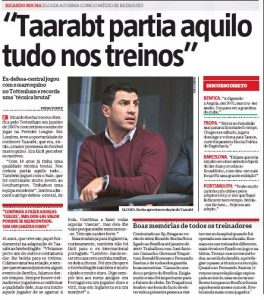 Still speaking of his time in England, Rocha said he had a hard time adapting to Premier League football, even though he felt like an experienced player at the time.

“I remember being at home with my wife, the two of us crying. It was a shock and English football is also very fast and very tough. I always say this to my friends: in Portugal I was a tough and manly player, but in England I was a boy!”

Ricardo Rocha left Benfica to join Tottenham in January 2007 in a €5m deal. In two and a half seasons with the club, he’s made only 18 appearances with Spurs, and won a League Cup.

He left for Standard Liege in 2009, and one year later, he returned to England, where he signed for Portsmouth and retired there. He’s recalled his time at Pompey as well.

“I have a lot of affection for the club and the fans and that’s why I stayed there for so long. I felt so good… Today I’m a fan.”