On December 18th, Manchester United confirmed they have parted ways with Jose Mourinho and will bring in an interim manager until the end of the season before appointing a new manager next summer.

Reports in England are claiming Mauricio Pochettino of Tottenham Hotspur to be the main target and the Argentine did nothing to put the speculation linking him with the Old Trafford job to bed.

We’ve taken a look at the reports in Spain and even they are suggesting the Red Devils are keen on hiring the former Southampton boss.

Mundo Deportivo views the Spurs manager as an ‘ideal candidate’ to take charge at United.

Despite signing a new five-year contract earlier in May, Pochettino is having tensions with his employer due to the delay in the construction of the club’s new stadium. 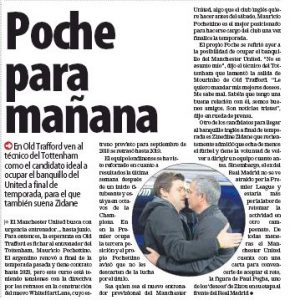 The Catalan newspaper mentions the 46-year-old is best placed for the job with the 20-time English champions.

AS also claim Pochettino is the ‘favourite’ to become new United manager next summer, but suggests that negotiation with Tottenham chairman Daniel Levy will be tough.

This is because the former Espanyol coach does not have a termination clause and from now until the end of the season, the Premier League giants will try to convince him to join them.

Pochettino will not respond to the Red Devils until they agree on fee with Levy.

AS claims, if all parties agree, the Spurs manager’s transfer will see him become the ‘most expensive manager’ in football history, but there is no mention of any figures in the report.