Norwich City duo Danel Sinani and Melvin Sitti are edging closer to joining Waasland-Beveren, if multiple reports coming out of Belgium are to be believed.

Today’s editions of Het Nieuwsblad and Het Belang van Limburg have short reports on the latest developments regarding the Canaries winger and midfielder.

It’s claimed both Sinani and Sitti are scheduled to undergo their medical tests on Thursday before completing their moves to the Belgian club.

Het Nieuwsblad states the two players are ‘on the way’ to Waasland-Beveren, and will be loaned for one season.

Sitti joined the English club from Sochaux in January, and spent the second half of the last campaign on loan at his former club. Sinani agreed a deal to join Norwich from the 2020/21 season, earlier in April. 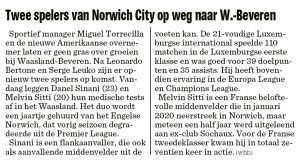 Both Sinani and Sitti have yet to make an appearance for the Championship side, and a loan move to Waasland-Beveren means they will have to wait for another season to represent Norwich.