Claims made in Italy about the Whites are now backed up in Belgium by Het Nieuwsblad.

They state the number of clubs showing interest in the 21-year-old is growing as Jesse Marsch’s side are added to the list.

Het Nieuwsblad explain they have found out the Premier League side have the Belgium international on their radar. Leeds are thinking about the Club Brugge attacker to replace Raphinha, who is heavily linked to Barcelona and Arsenal.

The Jupiler Pro League winners, for their part, will ‘ask for the jackpot’, to let De Ketelaere leave in the ongoing window. The outlet states a €25m fee wouldn’t be enough and even €30m is considered on the low side.

Although Leeds are in the mix to sign De Ketelaere, the question is whether he is ready to make a switch to Elland Road. He had made it clear that joining a club from the mid or lower half of the table is not his priority.

Today’s edition of Gazet van Antwerpen also claim Leeds have the player in their target list. 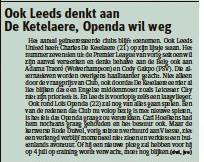 Leicester City had showed interest in the past, but he didn’t favour signing for the Foxes as they finished ninth in the table.

With Leeds finishing just above the relegation zone, it is unlikely De Ketelaere would be open to joining them, at least this summer.