Three days ago, Diario de Navarra explained CA Osasuna have been in contact with Watford for Cucho Hernández’s transfer.

The Spanish side share a good relationship with the Hornets after Pervis Estupiñan’s successful loan spell, and the former are hoping this will help them in signing the striker.

Hernández spent the 2019/20 season on loan at RCD Mallorca, managing five goals and an assist in 22 league matches.

Mundo Deportivo now also state the 21-year-old is one of the targets Osasuna have in mind to reinforce their attack. However, they are aware the English side are a ‘tough’ club when it comes to negotiating for transfers.

One ‘factor’ could favour the Spanish side in taking the South American. According to the report, the frontman doesn’t have a work permit to play in England, and this could facilitate his move to Osasuna. 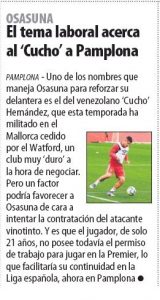 Diario de Navarra have backed up the claims made by Mundo, and they add Hernández’s failure to obtain a work permit to represent Watford will make it easier for Osasuna to sign him this summer.

It’s claimed the attacker will not be eligible to represent Watford until early next year.