Home Premier League Burnley ‘Two solutions’ for player – One is Wolves transfer, other is ‘contract...
SHARE

Despite their previous attempts to get rid of him, Napoli are still unable to offload Faouzi Ghoulam.

The Algeria international is a bit stuck at the Serie A side, which is why they have called upon his agent, who so happens to be Jorge Mendes, to try and sort things out.

Corriere dello Sport cover the situation, making it clear to their readers that Wolverhampton Wanderers remain an option for the player and his representative.

Napoli want to buy someone at left-back, but ‘first it will be necessary to say goodbye to Ghoulam’.

For the defender, there are ‘two solutions’, with the ideal scenario being a ‘sale, with Mendes, who works for the internal Wolverhampton hypotheses’.

The second scenario is a tad more drastic because it’s the ‘termination of his current contract expiring in 2022’. 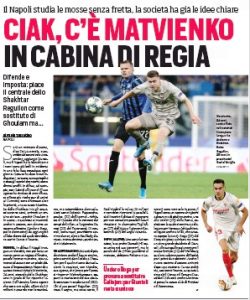 We’ve seen this happen a lot this summer, with players such as Henrikh Mkhitaryan and Alexis Sánchez deciding it was easier to cancel their deals with their current clubs to sign elsewhere rather than wait for everyone to agree on fees and such.

Perhaps that’s what Wolves are waiting for to make things easier?

Either way, it appears Mendes would like Ghoulam at Molineux if possible, but that could also all depend on whether or not Nuno Espírito Santo wants him.